Dr. Donna Cox will present a visual feast of big data visualization projects for science discovery and public outreach. Cox’s novel visualization schemas and advanced virtual tools provide an important resource for both science and art communities. She directs the Advanced Visualization Lab (AVL), an interdisciplinary visualization team who collaborate with big data scientists around the world. Cox and her team collaborate with science writers, producers, and directors to incorporate scientific visualizations into broad public experiences and non-fiction large-scale science productions. AVL thrills millions of people through compelling virtual tours of complex data phenomenon in IMAX movies, digital fulldome productions, interactive exhibitions, and HD/4K television broadcasts. She was Associate Producer for Scientific Visualization and Art Director for the PIXAR/NCSA segment of the IMAX film, Cosmic Voyage, nominated for Academy Award 1997. The AVL created over 25% of the length of the 5K stereo IMAX film, Hubble3D, narrated by Leonardo DiCaprio, which was won the giant screen awards for the best film, best choreography, and best life-long learning 2010. She and her team have co-produced successful digital fulldome productions including Dynamic Earth narrated by Liam Neeson and Solar Superstorms narrated by Benedict Cumberbatch. Each of these digital films address important topics that relate science to grand challenges in society. Most recently AVL completed the opening and closing shots for A Beautiful Planet to premier in NYC April 16, 2016. AVL’s unique contributions to the research community include the cinematic-quality presentation of large data to provide insight, to advance communication among diverse communities, and to create a new visual language to convey complex scientific topics to the broad public. 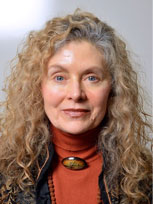 Professor Donna Cox, MFA, PhD, is the Director of the Advanced Visualization Laboratory (AVL) at National Center for Supercomputing Applications (NCSA), Director of the Emerging Digital Research and Education in Arts Media Institute (eDream), and Professor in the School of Art and Design, University of Illinois. She is a recognized early innovator in the Art of Scientific Visualization and invented the interdisciplinary collaborative method known as â€˜Renaissance Teams’. Over her 30-year career, she has directed and produced a large body of digital media work through the convergence of art and science. She is an international keynote speaker, juried contributor and former director-at-large at SIGGRAPH conferences, and recipient of numerous awards and grants for outreach visualization and informal education research. The Chicago Museum of Science and Industry recognized Cox as one of 40 “modern-day Leonardos”. She has been endowed with the first Michael Aiken Chair since 2007.