Watch a recording of this seminar here.

Possibly *the* most important obstacle in the deployment of predictive models is the fact that humans simply do not trust them. If it is known exactly which variables were important for the prediction and how they were combined, this information can be very powerful in helping to convince people to believe (or not believe) the prediction and make the right decision. In this talk I will discuss algorithms for making these non-black box predictions including:
1) “Bayesian Rule Lists” – This algorithm builds a decision list using a probabilistic model over permutations of IF-THEN rules. It competes with the CART algorithm.
2) “Supersparse Linear Integer Models” – This algorithm produces scoring systems, which are a type of model that is widely used in the medical community. It proposes an alternative to the Lasso method.
I will show applications to healthcare, including an alternative to the CHADS_2 score, which is one of the most widely used scoring systems in medicine. Our model was trained on over 1000 times the amount of data as CHADS_2 and is more accurate, but is just as interpretable. I will also show preliminary joint work with the MGH Sleep Lab on diagnosing forms of sleep apnea. At the end of the talk, I will discuss random cool applications of machine learning being worked on in the Prediction Analysis Lab. 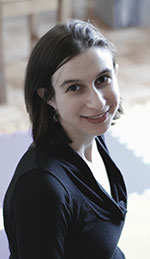 Cynthia Rudin is an associate professor of statistics at the Massachusetts Institute of Technology associated with CSAIL and the Sloan School of Management, and directs the Prediction Analysis Lab. Previously, Prof. Rudin was an associate research scientist at the Center for Computational Learning Systems at Columbia University, and prior to that, an NSF postdoctoral research fellow at NYU. She received a PhD in applied and computational mathematics from Princeton University in 2004. She is the recipient of the 2013 INFORMS Innovative Applications in Analytics Award. She was given an NSF CAREER award in 2011. Her work has been featured in IEEE Computer, Businessweek, The Wall Street Journal, the Boston Globe, the Times of London, Fox News (Fox & Friends), the Toronto Star, WIRED Science, Yahoo! Shine, U.S. News and World Report, Slashdot, CIO magazine, and on Boston Public Radio.